On Tuesday, the New York Times published a story by staff writer Pete Thamel highlighting the different ways in which coaches are now communicating with top recruits. Rather than jumping through the numerous hoops of phone calls and their subsequent hyper-regulation (the errors of which have been thoroughly highlighted in recent weeks), many coaches are now bypassing the traditional route and jumping straight into social media. 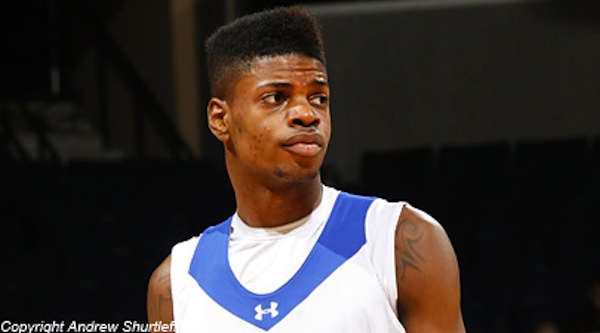 While the anecdotes provided by a variety of Division I coaches in the article were less than revolutionary, the strategy openly professed by one of the top recruits in the Class of 2012 was more eye-opening: Tilton (N.H.) School center Nerlens Noel (pictured above), one of the top-five rising senior recruits, doesn't want to talk to coaches at all. He just wants to send messages on Facebook.

"I'm on daily," Noel told the New York Times of Facebook being his preferred method of contact. "It's not a hassle, where they call you and you have to be on the phone for a long time. It's just like a message. It's a great way to contact me."

While there are time restrictions that contribute to Noel's reliance on Facebook -- the Tilton School allows him just one hour of free time per day -- coaches said the expected future star was hardly alone. One NCAA Division I assistant basketball coach said 75 percent of his communication with athletes comes over Facebook.

Focusing on Facebook messages also brings other advantages for coaches, too. Provided that they are sending private messages (as opposed to posting on a player's wall), there is no limit to the number of messages they send. The same can be said of Twitter, provided that a coach sends a direct message as opposed to a public tweet.

Yet those guidelines have also created a certain amount of gray area, with some programs appearing to resort to rather unorthodox -- and ethically questionable -- means of making their interest in a player's status publicly known.

The unlimited contact on Facebook and Twitter may have set off a new race of hyper-aggressive coach badgering, but some coaches are already campaigning for more strict regulations on the amount of times they and their counterparts can reach out to recruits on social media.

"That's the one thing I think the N.C.A.A. needs to be better at," Colorado football coach Jon Embree told the Times. "I don't think they can get hold of this technology. I don't understand why you can't text-message a kid but you can Facebook him back and forth. It's the same thing."

It's hard to know whether Embree and some of his contemporaries will ever get their wish. In the meantime, they might want to get back to Facebook and inboxing their recruiting targets. Otherwise they'll probably miss out on the likes of Noel and his counterparts.